From a media conglomerate that keeps making remakes that no one asked for, comes a reimagining of a classic tale about a boy, his genie and love. Directed by Guy Ritchie, Aladdin stars Will Smith, Mena Massoud, Naomi Scott and Marwan Kenzari and is a live-action remake of the 1992 animated film of the same name.

A Tale of a Genie and Three Wishes

The most important character in this film is the titular character, because if Aladdin isn’t right then you gotta throw the whole film away. Luckily for Walt Disney Pictures and this remake, they did a tremendous job at casting their main character. Mena Massoud had a big magic carpet to fill and his take on Aladdin was one of the strongest performances in the film, second to his Genie (Will Smith).

Massoud’s singing is fine, the “A Whole New World” bit sounds better in the original movie but the visuals are great in this version.

Naomi Scott is a talented actress and singer and the role of Princess Jasmine allowed her to showcase some of her talent. She can sing and hold notes, but her big song moment comes when she performs “Speechless,” a perfect song for what her character’s storyline, but it feels terribly misplaced in the film.  It comes right off the heels of another song which makes it seem like it was just crowbarred into the film. 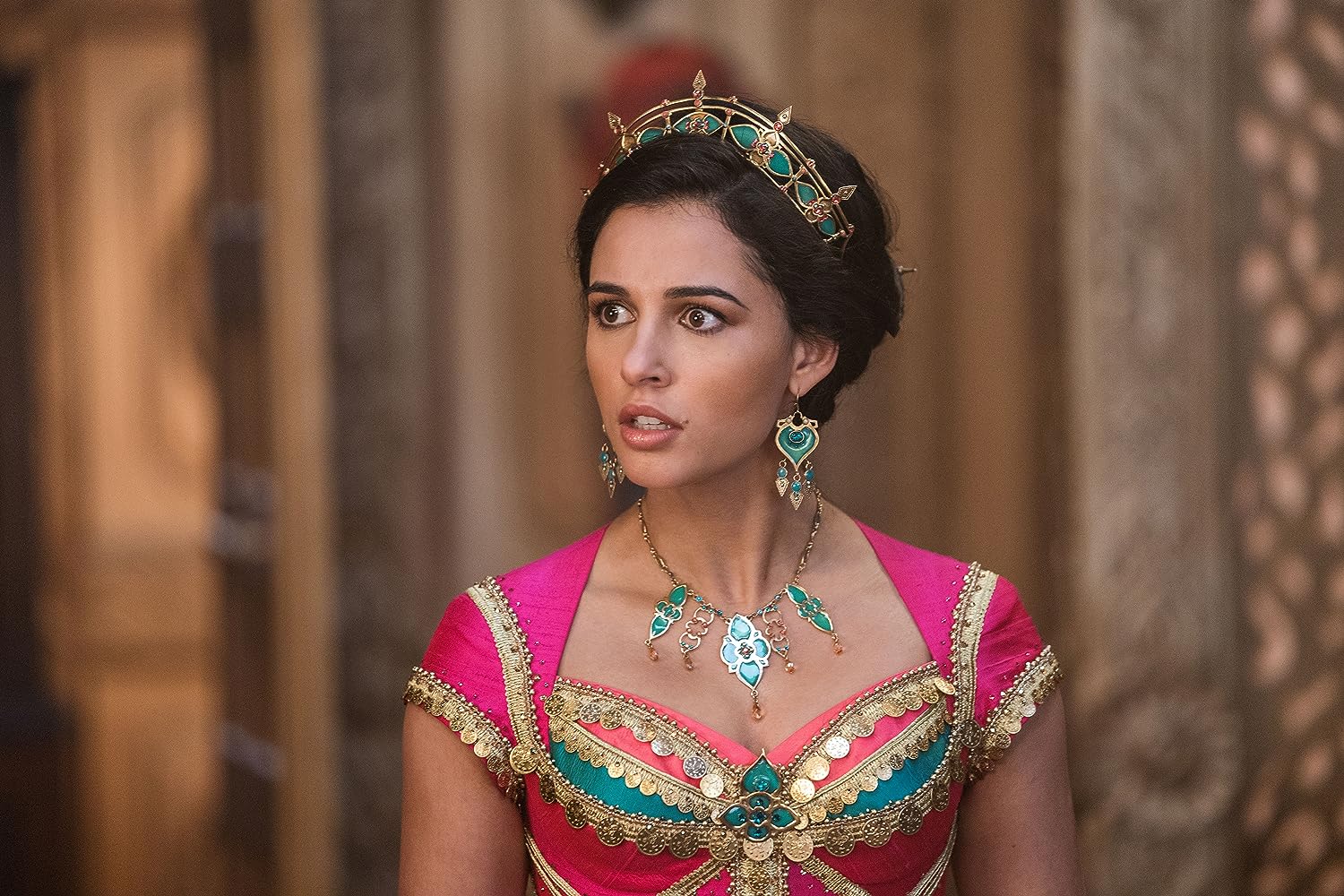 Naomi Scott’s casting as Princess Jasmine did not come without criticism, with some accusing Disney of colorism. Agrabah is a fictional place but it is a fair argument that a film set in the Middle East had most of the darker skinned actors portraying extras/minor roles or evil characters. Disney wants to create more diverse films, but it does seem like they do not want to go out of their way to cast darker skinned actors if they don’t have to. Whenever the eventual Mulan live-action remake comes to theaters, maybe Disney will have learned from Aladdin.

One change from the original animated movie is this film introduces us to a loyal handmaiden to the princess, Dalia (Nasim Pedrad), who is Genie’s love interest in the film. Pedrad has a lot of charisma in the scenes that she is in and she has comedic chops. Despite the age difference her and Genie were a good match and had great chemistry with each other.

Going into this movie, the question that everyone was wondering was how Will Smith will live up to Robin Williams’ portrayal as the Genie. To set the stage, the year is 2019 and we have an iconic character from the 90s portrayed by an iconic actor from the 90s and it was far better than I expected. Will Smith practically plays Blue Will Smith and he brings credibility to the film.

For much of the film he acts as Aladdin’s wingman, but it works and nothing ever feels forced. Think Hitch but instead of Kevin James, there’s dance numbers and a young Middle Eastern man chasing after a princess. Will Smith’s singing does need work, in the year of our lord two thousand and nineteen, we have autotune but I guess the sound crew thought Smith didn’t need it – Reader, they were wrong.  But where this – *squints* – 180 million dollar production misses the mark is the CGI when the Genie appears. Look at these pictures:

There are times where Genie’s blue body doesn’t even match his head. For a 180 million dollar production, you would think someone at Disney would’ve done a better job. Disney has some of the best animators in the world so this disheveled looking Genie should’ve never happened. For all the hate that the Dumbo remake gets, at least they took time to make Dumbo look nice. Maybe Genie suffered from rushed reshoots that limited post-production, but if there is a prequel film then I hope they take their time to get it right.

The most disappointing character in this live-action remake is Jafar (Marwan Kenzari). I know it’s 2019 and certain things from 1992 wouldn’t appeal to today’s audience, but if you’re going to have a different take on the character at least give it some sort of personality besides “generic evil bad guy #1.”

Kenzari has an expressive face but outside of that the movie doesn’t do much with Jafar and since he plays such a huge part in the film his scenes are – for a lack of better words – boring. I don’t think Kenzari deserves all the blame for Jafar’s mishaps because the character feels underwritten as a whole for a live-action film.

Jafar’s talking and wisecracking scarlet macaw Iago doesn’t talk much in this film. He spends most of the movie just making one-off comments and this takes a layer away from Jafar’s character in the process. The film tries to give Jafar a backstory to make the audience understand why he’s such a great villain, but it isn’t slightly compelling.

The film ends with a way to set up a possible Return of the Jafar-esque sequel, but that’s something that should stay on the drawing board for now. It’s criminal that one of the most iconic Disney villains has had his personality stripped away and replaced with no sense of unique character traits. The protagonist is only as good as the antagonist that they have to overcome and Jafar sinks Aladdin’s magic carpet.

For a film such as Aladdin, the template was created in 1992, so for any future remake all the cast and crew has to do is not mess it up. There isn’t much going on in this remake to set it apart from the previous version, but the design teams and their artistry give this film life. Game of Thrones production designer Gemma Jackson was tasked with production design while Michael Wilkinson handled the costume design.

The costumes have a Bollywood type of feel with their bright colors and intricate garb that gives the background characters some personality. Just watching it on the big screen it’s hard not to be drawn in by the people of Agrabah. Just look at the image below:

And to watch all of this in motion is the true meaning of visual art. When the Genie performs the “Prince Ali” number, Will Smith can’t sing that well but as you’re watching all the set pieces, extras and colorful costumes, they distract from Smith’s singing voice to create an enjoyable scene.

After watching the trailers for this film I went into this one with low expectations, surprisingly, it was better than I expected. The biggest complaint that I had with this remake is that when I walked out of the theater I couldn’t help but think that this movie didn’t have to be made. There was never a moment in the film that really felt fresh or better than the original animated version of Aladdin. Based on the trailers, Will Smith’s Genie looked questionable at best, but after watching the entire film he’s the best part of it. Never judge a blue CGI man by his cover, I guess? He brings a sense of culture (by acting like Will Smith) to the role of the Genie that some may not enjoy but for me it worked. He and Aladdin have great chemistry, but whenever they’re not on screen the movie suffers at times.

The production of the film is phenomenal, there was a lot of time put into the costumes and set pieces and I would not be shocked if there was an Oscar nomination to be had in the future. The sequencing of some of the musical numbers was frustrating, especially the song Jasmine sings in the third act because it’s completely out of place. Jafar is also disappointing. With that said, Aladdin is a serviceable remake of a timeless classic and I would not be opposed to a Maleficent-style prequel for Will Smith’s Genie. If the House of Mouse is going all in on these cash grabs, then at least with this one the titular character plays a major part in the film unlike their other remake.  A whole generation of kids will grow up watching this version of Aladdin which could’ve been better yet also much, much worse.