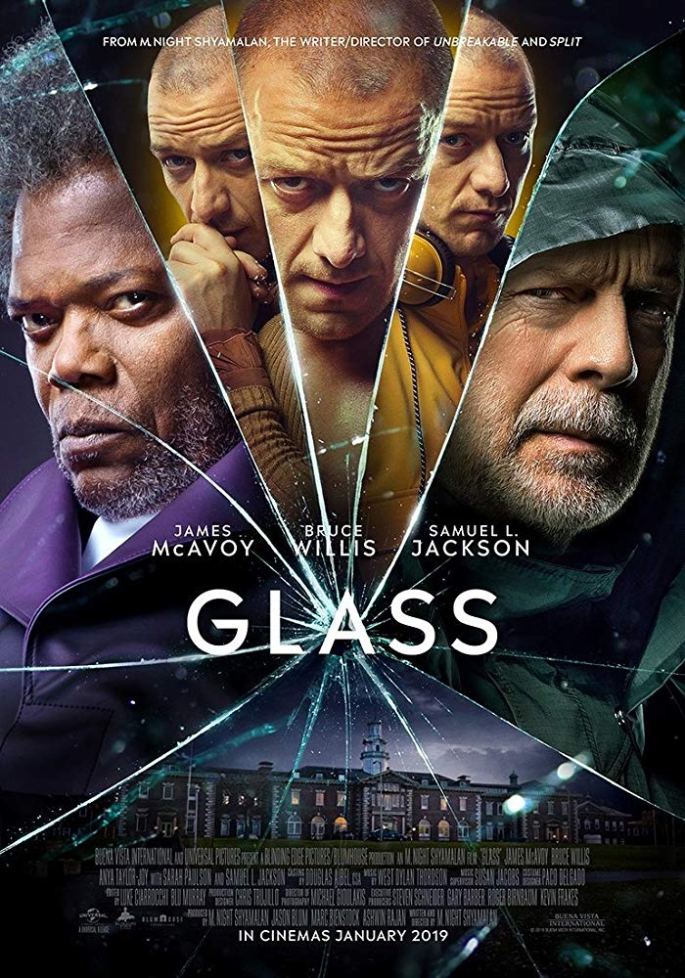 I had my own personal Shyamalanathon before watching Glass as a refresher. If you haven’t seen the previous two films in this trilogy then see them beforehand. There’s a few things about Shyamalan’s style that caught my eye in Glass. As a filmmaker, Shyamalan’s techniques at creating thrilling moments are on full display in this film. He still has those same Hitchcockian elements to his style when it comes to panning the camera and creating the right shot for the perfect reaction. He’s Hitchcock behind the camera and in front of it when it comes to making his cameos. As a writer some of his dialogue is riveting, especially delivered by the actors in this cast. The first half of the film is where the dialogue and the storytelling are at their best. Samuel L. Jackson puts a masterclass on how facial expressions can convey an impactful message without uttering a single word. James McAvoy’s performances with multiple personalities is just as good as it was in Split. He brings humor yet when he transforms into The Horde, he’s just as menacing.

Bruce Willis didn’t really bring anything to the film for me. During the opening action sequence at the beginning of the film he wasn’t intense and he was nowhere near the level of James McAvoy. For most of the film I wasn’t 100% convinced that Bruce Willis wanted to be there. Anya Taylor-Joy picks up where she left off in Split with another compelling performance by the scream queen. Sarah Paulson had a good performance, but for some reason when M. Night wrote the dialogue for Dr. Ellie Staples he just decided for it to be bland. She might as well be a narrator because she’s just explaining what we are seeing instead of the film showing us. It gets to a point in the film where it makes you question if Shyamalan wrote this film back in 2000 and just didn’t decide to update it for 2019 before filming it. The scenes after the climax and the very last scene of the film further exacerbates this point.

Quick rant about the biggest issue with The Overseer (what a name). The human body is made up of around 60% water and the Earth is made up of 71% of water, so having water being David Dunn’s kryptonite has always seemed kind of goofy. For Mr. Glass it makes sense that he would have “brittle bone syndrome” because he’s a genius. Being a Lex Luthor type character and having a weak body seems like an even trade-off. Kevin Crumble has 24 different personalities that are always battling for the light so for flashes of light triggering a reaction also makes sense. Unbreakable explains that Dunn nearly drowned as a child so he’s not as strong once he’s submerged in water. 19 years later, it’s still a strange weakness to have on planet Earth.

This film is the weakest in the trilogy. There’s a lot of flaws in logic that are apparent throughout the movie. Most of the cast gives quality performances throughout the film. Shyamalan’s direction is up there with some of the best films in his filmography. The writing is where, for lack of better words, the glass shatters. It’s a shame because I really enjoyed Split and I thought Unbreakable was pretty good. In many ways Glass’s biggest twist is that the films (and their titles!) that make up the Eastrail 177 trilogy serves as a metaphor for director M. Night Shyamalan’s career. Unbreakable, a reference to a time when M. Night was at his peak; when Split was released he was going through a rough patch and audiences were divisive on whether or not he still had it; and to top it all off, Glass is a film that, depending on your view, either feels half-empty or half-full once it reaches its conclusion.